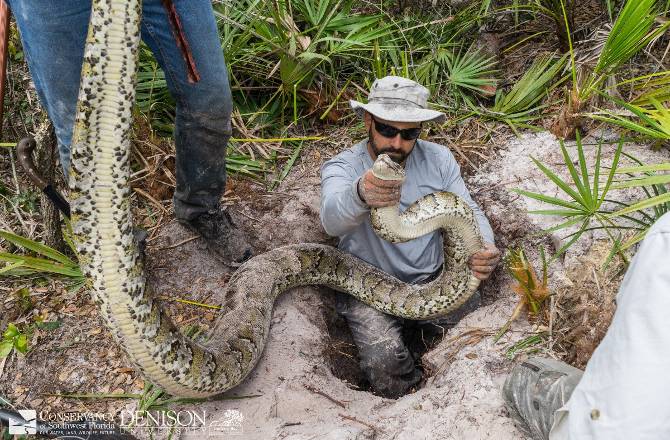 A gigantic Burmese python stretching a record-setting 16 feet long and weighing 140 pounds was among the more than 2,000 pounds of snakes captured in southwest Florida over the past three months, the Bradenton Herald reported Friday.

There was no specific information immediately available as to the location of reptile that researchers said set a Sunshine State record.

The Florida Fish and Wildlife Conservation Commission is quick to explain that the removal program is not a “hunting program”. According to the FWC website,   “The Burmese Python Removal Program is a management tool that allows people to remove Burmese pythons and other nonnative reptiles from state lands, and is not a python hunting program or a recreational program.”

During the month-long removal program , individuals tracked the snakes during their peak breeding season in February, when males would often lead the scientists to pregnant females with clutches of 24 eggs or more.

More than 600 people  signed up for the Python Challenge, according to Carli Segelson, a spokeswoman for the Florida Fish and Wildlife Conservation Commission, which organized the event.

Why? Because the Burmese python, which can be as large as 23 feet long and weigh up to 200 pounds, doesn’t belong in the Everglades, in Florida — or even in this hemisphere for that matter.

Once allowed as an exotic pet, officials trace the Burmese python’s entry into the ecosystem to 1992, when “Burmese pythons escaped from a breeding facility that was destroyed during Hurricane Andrew,” according to the Florida Fish and Wildlife Conservation Commission’s website. “It is also likely that pet pythons have been released in and around the Everglades,” it says.

The effect has been profound; the invasive species is responsible for causing the near “complete disappearance of raccoons, rabbits and opossums,” according to the USGS, and goes almost completely unchecked in its environment.

A cash prize goes to the hunter who captures — dead or alive — the most Burmese pythons, as well as one for the longest one.  Studying the record-setting 16 ft python in the laboratory Thursday evening, Conservancy of Southwest Florida biologist Ian Bartoszek remarked: “It makes you wonder—in the next ten years, what will we be dealing with?”