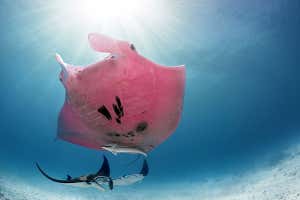 Inspector Clouseau is a reef manta ray (Mobula alfredi) who has captivated the scientific community and has stolen hearts all over the world. Seldom photographed since its discovery in 2015, the pink wonder recently went viral when photographer Kristian Laine captured it swimming through the Great Barrier Reef near Lady Elliot Island, off the coast of Queensland, Australia.

Laine didn’t realise at the time that he had seen the only known pink manta ray in the world, affectionately dubbed Inspector Clouseau after the protagonist of the Pink Panther franchise.