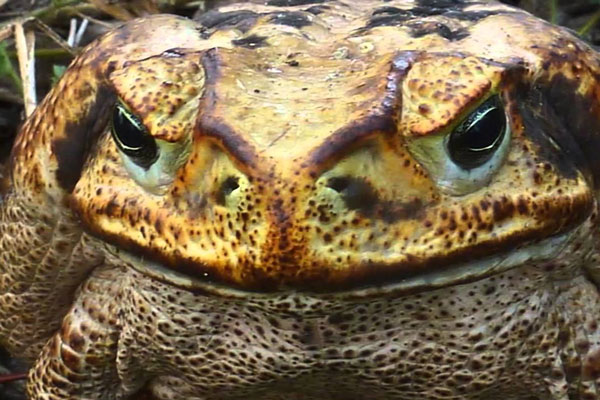 The yellowish-brown cane toads, also known as bufo, marine, or giant toads, are making an appearance in South Florida after the recent heavy rains stirred them up from their burrows and gave them plenty of water to breed in. These animals are not native to Florida and are a poisonous invasive species.

How did the Giant Cane Toad get here?

This species of Toad is not native to the United States. It was originally released in the U.S. in sugar cane fields to help control “white grubs,” larvae of pest Scarabaeidae. Rhinella marina (formerly Bufo marinus) became established in southern Florida as a result of an accidental release of about 100 specimens from the stock of a pet dealer at Miami airport in 1955, and by subsequent releases by pet dealers in the 1960s (Krakauer, 1968).

If they are not native, way do they flourish in Florida?

Marine Toads are a highly predacious exotic species that will eat all types of native frogs and toads as well as other small animals. This species is skilled at locating all types of food, they have even been known to eat pet food. They are what scientists term a generalist and they are highly skilled at reproduction as well. The Giant Cane Toad breeds year-round in standing water, streams, canals and ditches.

They are just Toads, so why has a warning been issued?

When this non-native species is threatened or handled, it secretes a highly toxic milky substance from its large parotoid glands at the back of its head, behind the ears (see diagram). This secretion can burn your eyes, may irritate your skin, and can kill cats and dogs if they ingest the secretion.

How can I tell a regular toad from a Cane Toad?

The most important characteristic is they have no crests (see image) and they have much larger and triangular glands.

The University of Florida and the University of Georgia schools of Veterinary Medicine both caution against any contact with these toads. If you are not comfortable with identification, just avoid all toads. Although interactions with humans are normally not fatal, the poison can prove fatal to canines and felines.

What does the poison do to pets?

A cane toad’s toxin can kill your pet in as little as 15 minutes without proper treatment.  The dog’s (or cat’s) gums often turn red, an indicator used by veterinarians to distinguish toad poisoning from epilepsy. For this reason, pet owners should be familiar with their pet’s normal gum color. Symptoms of Marine Toad poisoning in pets include drooling, head-shaking, crying, loss of coordination, and, in more serious cases, convulsions.

If my pet comes in contact with a suspected Cane Toad, What should I do?

If you suspect toad poisoning, get a hose and run water in the side of the dog’s/cat’s mouth, pointing the animal’s head downward so water isn’t swallowed. Rub the gums and mouth to remove the toxin. This treatment is usually successful if performed immediately but call your veterinarian and take your pet to be examined as soon as possible.

Why should we watch the weather?

If summer turns out to be wetter than normal, as forecasts are predicting, tadpoles will have better chances of survival, potentially creating a population boom for the largest toad found in Florida — a big concern for many pet owners.

The following is a video showing the differences in size for a common toad and the Giant Cane Toad. This one is a pet called Cookie who weighs a whopping 4 pounds. In this pet toad, the glands that secrete the poison have either been removed or milked prior to handling as to not endanger the kid handling cookie.

Want to read more about interesting animals- check out: