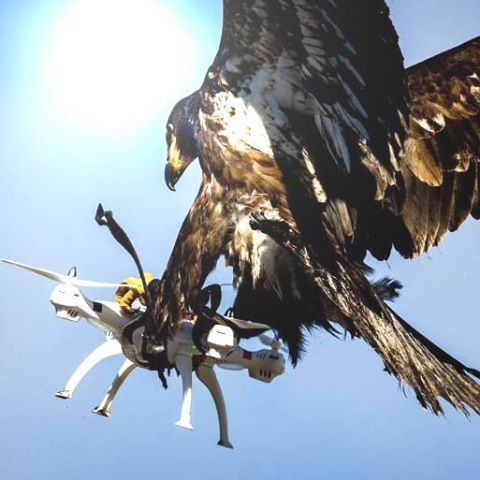 A bald eagle took down a government drone in Michigan, state officials said Thursday. The Drone was attempting to map erosion along the shoreline when the bird decided that it was an unwelcome visitor in the habitat.

The bird of prey attacked the Phantom 4 Pro Advanced quadcopter drone about 162 feet in the sky, “tearing off a propeller and sending the aircraft to the bottom of Lake Michigan,” according to the state Department of Environment, Great Lakes, and Energy. It is thought that the Eagle may have mistaken the drone for a seagull due to the similar coloring.

“The attack could have been a territorial squabble with the electronic foe, or just a hungry eagle,” the department said. The motivation was unclear but the result of the interaction was fatal for the drone.

An environmental quality analyst and drone pilot, Hunter King, was mapping shoreline erosion on Lake Michigan with the device, which was flying at 22 mph, when it began twirling out of control and he spotted an eagle flying away, it said. All he could do was watch as the drone plunged into the water.

A bird-watching couple that was nearby said it saw the eagle strike something and appear to fly away uninjured, department officials said.

To try and recover the drone, a team was deployed in an attempt to save the data and possibly repair the device. Unfortunately, the search was unsuccessful. The device was suspected to be 150 feet offshore. A state drone coordinator, Authur Ostaszewski, used a kayak and snorkeling gear in his unfruitful search, state officials said.

The $950 drone is obsolete and will be replaced with a newer model, the department said.

The Department of Environment, Great Lakes, and Energy said one idea it’s exploring is using coverings for the devices that would make them look less like seagulls.