Have you ever wondered about the STEMtastic Elements of Sports?

The NCAA Baseball tournament is upon us.  It is one of the best times of the year to see America’s Favorite Pastime played with heart and soul while also delving into the science behind the game.

There are various aspects of science in baseball, and both batters and hitters use physics in every at bat. Since major league pitches are so hard to hit, physics is sometimes unknowingly used to make it easier to connect with the ball.


According to Major League Baseball, the pitcher’s mound is 60 feet, 6 inches away from home plate. It takes the ball about 0.4 second to travel this distance. Dr. Cynthia Bir, a Professor of Biomedical Engineering at Wayne State University in Detroit, MI, determined that as the ball leaves the pitcher’s hand, it takes 0.1 second for the hitter just to locate the ball. In this period of time, the ball has already traveled 12 feet.

This is significant, because it emphasizes how fast a reaction time is needed to even hit the ball. After the batter locates the ball, they then take seven hundredths of a second to calculate speed, spin and trajectory. In this time the ball has already traveled another 10 feet. It then takes the batter 0.017 second for the brain and body to work together to execute a swing.

This means that the batter has about 0.09 second to make the decision whether to swing or not. If the hitter hesitates for even a thousandth of a second, it could result in a foul ball or a strike.

Think you have what it takes, try this simulation to see if your reaction time is quick enough. 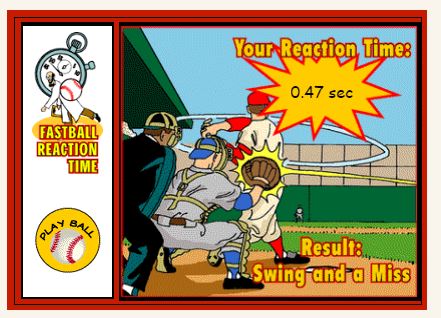 Since the mound is even closer to the batter at younger ages, if you face a pitcher who has a rocket for an arm at age 12 or 13, you have to make decisions even quicker.  Recently, my son’s ball team played at a Tournament in Tennessee at The Cal Ripkin Experience in the 11U divison. One of the pitchers that they faced was pitching 76 miles per hour from 46 feet 6 inches away.  To quote our son, ” I had to start swinging as soon as I saw it leave his hand and it was just a miracle that I hit it”. Yes son- yes it is a small miracle.

Another aspect of physics in baseball is the optimal angle at which the ball must be hit.

According to The Physics of Baseball, a book written by Yale professor Robert Adair, the best angle at which to hit the ball is when the bat is at a 45°.

This is the angle at which the ball will travel farthest, thus resulting in a homerun. Remember, that the best players of this game have to make the decision to swing or not and adjust their angle in milliseconds.

Pitchers are another thing all together. A pitcher uses his body movement to execute a pitch. Exploratorium states that pitchers use something called the sequential summation of movement.

According to an article written by David Barker, a physics professor at Austin College in Sherman, TX, sequential summation of movement is the momentum of body to ball.

How it works is the largest body mass moves first, then so on, according to decreasing body mass. To do that, the pitcher first drives his legs, hips, shoulders, arms, wrists and finally the fingers. This whip-like action gives the pitcher the ability to get the most momentum and accuracy on the ball. Some of this fundamental movement can be taught by mechanically practicing the pitching movement but most experts agree that the most amazing pitchers have an innate ability to transfer the ball through the range of motion to the plate in a way that is hard to teach.

For example, 94% of hall of fame pitchers take the ball over their head in the full windup even though we rarely see this “taught” at a young age.  Why?

The concept of bringing the hands over the head isn’t just for visual purposes, the concept serves a very real purpose that very few coaches, players, or parents understand in the game of baseball today. In simple terms, the movement forces the pitcher to create energy and timing in a rhythmic fashion that keeps the pitcher in a fluid motion and prevents tension within the arm and body prior to the release of the baseball.

Pitchers transfer the momentum from their body into the ball. This is why they use the windup that is so familiar to us. Taking a forward step also makes throwing the ball much easier, which is why the pitcher starts behind the pitching rubber and ends up thrusting his entire body forward. According to Exploratorium , the average major league pitcher can throw a ball at 95 miles per hour. The Complete Pitcher says that most High School Pitchers average 75-85 miles per hour and it is typical to see middle school pitchers in a wider range of 50-70 miles per hour.  This makes sense due to maturity and development differences at this age.

Pitch choice and delivery is one of the most studied and individualized aspects of any sport. Teams are becoming more open to hiring people with physics backgrounds, including Josh Kalk with the Twins and Mike Fast with the Braves, both of whom were acclaimed writers before joining the clubs.

Baseball is as much a mental game as a physical game. The batter is trying to predict what pitch will be thrown and the pitcher is trying to not be predictable.

So the game is based a lot on pitch choice and location. Many spectators enjoy the game for their entire lives without really knowing the difference between the various pitches.  This lack of knowledge in no way diminishes their enjoyment for the game. In fact, until I became a “pitcher mom”  about 15 years ago and had to really understand the different pitches, I am not sure I understood them well myself.

The secret to understanding any of the pitches is to be able to understand what the air moving past the ball is doing to the forces on the ball.

What difference does that make?

The higher velocity difference puts more stress on the air flowing around the bottom of the ball. That stress makes air flowing around the ball “break away” from the ball’s surface sooner. Conversely, the air at the top of the spinning ball, subject to less stress due to the lower velocity difference, can “hang onto” the ball’s surface longer before breaking away.

As a result, the air flowing over the top of the ball leaves it in a direction pointed a little bit downward rather than straight back. As Newton discovered almost three hundred years ago, for every action there is an equal and opposite reaction. So, as the spinning ball throws the air down, the air pushes the ball up in response. A ball thrown with backspin will therefore get a little bit of lift.

Curveballs do most of their curving in the last quarter of their trip.

Considering that it takes less time for the ball to travel those last 15 feet (about 1/6 of a second) than it takes for the batter to swing the bat (about 1/5 of a second), hitters must begin their swings before the ball has started to show much curve. No wonder curveballs are so hard to hit.

One important difference between a fastball, a curveball, a slider, and a screwball is the direction in which the ball spins.

Other important factors are the speed of the pitch and rate of spin. Generally speaking, a ball thrown with a spin will curve in the same direction that the front of the ball (home plate side, when pitched) turns. If the ball is spinning from top to bottom (topspin), it will tend to nosedive into the dirt. If it’s spinning from left to right, the pitch will break toward third base. The faster the rate of spin, the more the ball’s path curves.

So next time you are watching a Baseball game, you will now know a little more about the science and math behind the game.  Next time, we will tackle the engineering of the actual baseball.  Have another sport that you would like some STEMtastic facts about or any other questions, make a comment below, reach out on Facebook or on Instagram (@georgiastem)

How Hard is it to Hit a Baseball?

The Physics of Baseball