US COVID-19 mutation “G” is particularly abominable. We are trying to figure out why… 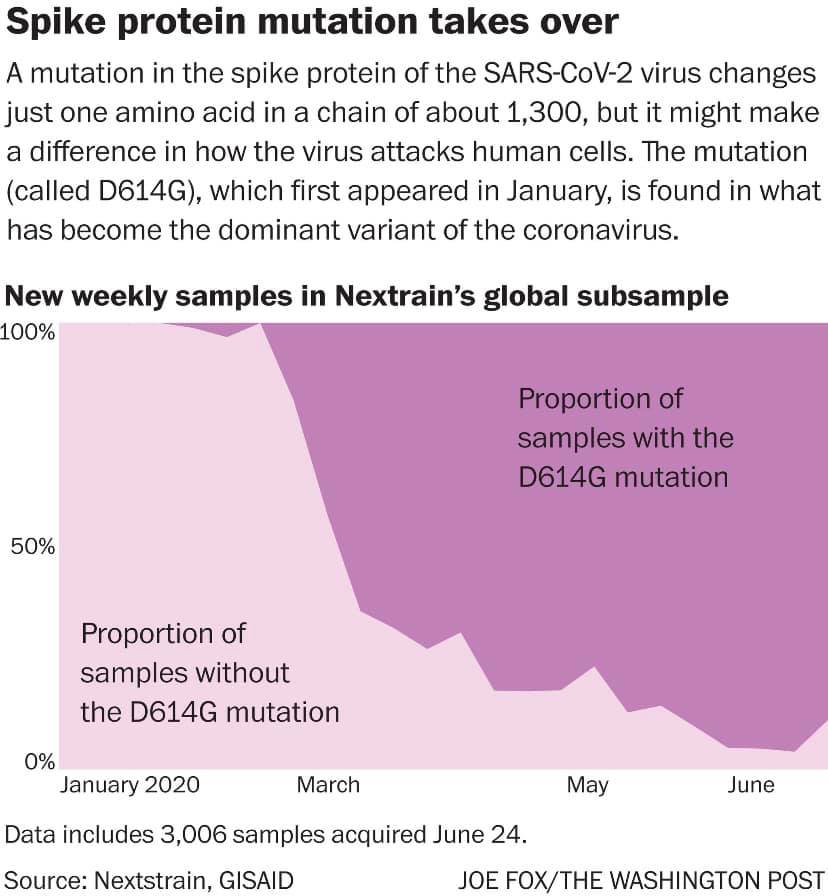 When the first coronavirus cases in the United States appeared in January, they bore the same genetic signatures as a germ that emerged in China weeks before. As scientists collected samples and began to study the nucleic acid and protein structures, they noticed a puzzling and concerning change. The first to report this mutation was Egon Ozer, an infectious-disease specialist at the Northwestern University Feinberg School of Medicine. He examined the genetic structure of virus samples from local patients, he noticed a change in the virus was appearing again and again. This mutation, associated with outbreaks in Europe and New York, eventually took over the city of Chicago (the locale of most of Ozer’s samples) and by May, it was found in 95 percent of all the genomes Ozer sequenced.

At a glance, the mutation seemed trivial. About 1,300 amino acids serve as building blocks for a protein on the surface of the virus. In the mutant virus, the genetic instructions for just one of those amino acids — number 614 — switched in the new variant from a “D” (shorthand for aspartic acid) to a “G” (short for glycine). In basic biology, we call this a point mutation or a single base substitution. In this case, it would be classified as a missense mutation. Single base substitutions can be significant and cause a variety of diseases, one of the most significant being sickle cell anemia. Ozer knew that he could not discount this single base substitution as insignificant.

As Ozer feared, the location was significant because the switch occurred in the part of the genome that codes for the all-important “spike protein” — the protruding structure that gives the coronavirus its crownlike profile and allows it to enter human cells the way a burglar picks a lock.

This particular mutation is now showing up in about 70% of the samples uploaded to the database and its ubiquity is undeniable. Of the approximately 50,000 genomes of the new virus that researchers worldwide have uploaded to a shared database, almost 35,000 carry the mutation, officially designated D614G but known more familiarly to scientists as “G.”

This tiny mutation is dominating the world COVID-19 infections. If we can better understand or even target the mutation, we can learn to “deadbolt” the door and block the virus from picking the lock.

The mutation doesn’t appear to make people sicker, but a growing number of scientists worry that it has made the virus more contagious. It seems to increase the viral load and allow the virus more access to a greater variety of human cells making it more infectious. This increases the R-0 of the virus also known as the reproductive rate.

“The epidemiological study and our data together really explain why the [G variant’s] spread in Europe and the U.S. was really fast,” said Hyeryun Choe, a virologist at Scripps Research and a lead author of an unpublished study on the G variant’s enhanced infectiousness in laboratory cell cultures. “This is not just accidental.”

But there may be other explanations for the G variant’s dominance: biases in where genetic data are being collected, quirks of timing that gave the mutated virus an early foothold in susceptible populations.

As you can see in the image, the new mutation has taken over and makes us concerned that the virus we were dealing with in Dec and Jan in China has gained so much more momentum and spread further in the US due to this variant.

We will continue to follow the science and keep you posted. As always, thank you for supporting Science, Technology, Engineering and Math in Georgia.