On March 11, 2011 a large section of the seafloor along a fault line 125 km (77 miles) offshore of Japan suddenly lurched, releasing huge amounts of energy through the crust and generating a 9.0 (Richter scale) earthquake. This quake would become known as the Tohoku Earthquake and although it was not the first major quake to strike Japan, it has left the most lasting and devastating effects of any in history. 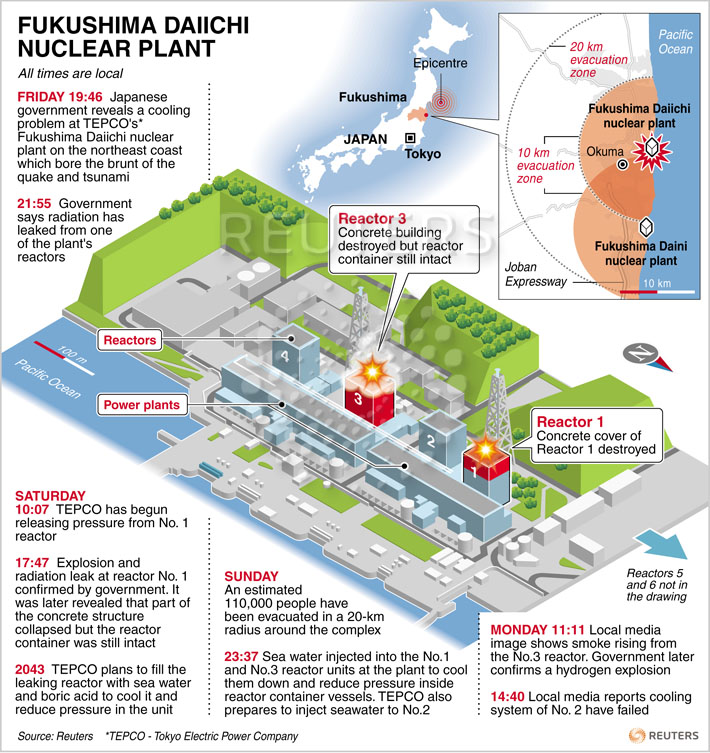 The earthquake spurned a tsunami, a powerful surge of seawater generated when an offshore earthquake displaces large volumes of rocks and sediment on the ocean bottom, suddenly pushing the overlying saltwater upwards. The waves speed out from the quake epicenter in all directions.  They are hardly noticeable at great depths in the ocean; however, as they approach shore they can rear up to staggering heights.

Japan has prepared extensively for earthquakes by increasing the scientific investment in earthquake proofing buildings and erecting seawalls to prevent tsunami damage.  On that fateful day in March 2011, their efforts were simply not enough.

The raging water swept inland 9.6 km (6 miles) and up to a height of 15 meters (49 feet) in some locations. The seawalls towering at 5.7 meters (19 feet) were simply not tall enough. The water swept over and tore buildings from their foundations, inundated towns and swept away boats in its wake. As the water receded, it carried the debris from the carnage out to sea.  The water claimed structural debris, vehicles, livestock and human bodies.

At the Fukushima Daiichi nuclear power plant, the water flooded the diesel-powered emergency generators.  When the local electrical grid went down, the back-up generators did not work.  The plant was unable to keep cool water circulating through the reactors that were operational.  Without this important coolant, the nuclear core in the reactors began to overheat. As the nuclear fuel got hotter, the coolant boiled off exposing the fuel to air and causing it to overheat even more.  This positive feedback loop continued with devastating consequences.

As the overheated nuclear fuel melted (nuclear meltdown), chemical reactions within the reactors generated hydrogen gas. This gas caused massive explosions at the plant in 3 of the reactor buildings.  This released radioactive gas into the air. At that point, the nuclear scientists had to make a decision.  To prevent further explosions and contamination, they pumped seawater into the reactors from the ocean.

To understand further what happened that day, check out this YouTube video explaining the process.

No longer were they hoping to salvage the plant, they were in crisis mode and trying to limit the inevitable damage that was happening.

The combination of the earthquake- tsunami-nuclear disaster claimed 18,000 lives and caused billions of dollars in damage. Over 300,000 people were displaced from their homes and a radius of 20 km (12 miles) around the plant has been permanently evacuated. Water contaminated water continues to leak into the Pacific Ocean even today. In fact in Feb. 2017, the radiation detected was still at unimaginable levels according to this news broadcast below:

Nuclear power came under scrutiny around the world after this incident.  In Georgia, there are several nuclear power plants that could threaten the well-being of Georgia residents if an accident were to occur here.

In the comments below, share the most interesting fact that you learned from the article and tell why. Make sure to include a valid email address to be entered into the monthly drawing for Georgia STEM prizes for our STEMtastic students.  We would also be interested in what other concerns or comments do you have about the Fukushima disaster?

Thank you for reading and remember:

Curiosity is the Beginning of Wisdom